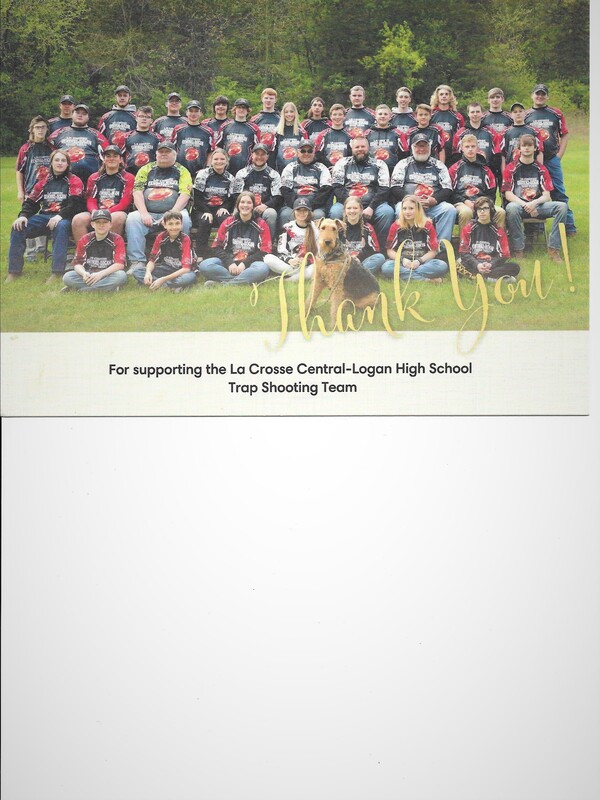 The high school trap shooting 2022 spring season concluded with their national tournament July 6-10th in Mason, MI.  And what a way to end the season!!  But first, here's a recap of the season. This spring in the state of Wisconsin there were 107 high school teams assigned to 2 classes and 15 conferences based on team size.  Aquinas was in class 2A conference 3. Central/Logan was in class 2A conference 4.  Aquinas finished 4th in their conference. Central/Logan came away with a 2nd place finish in their conference of 303 shooters. There were so many improvements by each one of the athletes by the end of the season, and they all should be proud of their accomplishments. Their coaches were proud of each and every one of them.

Congratulations to Aubrey Hass of Central/Logan and Alexis Stupi of Aquinas. Both finished as the top female shooters in their respective conferences.  Top team honors for Central/Logan went to Aiden Schulze with a 22.9 average and Aubrey Hass with a 22.6 average.  Top team honors for Aquinas went to Lars Gunderson with a 22.6 average and Alexis Stupi with a 22.5 average. All four of these athletes made the US High School Clay Target League All State Team. No easy feat with over 2900 athletes competing this year!  Congrats also to Cole Wehling for making the top 100. Cole competes for De Soto High School.

This year's state tournament was held June 12th in Rome WI.  High gun for Central/Logan went to Faith Hellerud who shot a 96.  With that score she finished 3rd in the state for females and 23rd overall.  Top ten females also included Taylor Turner with a 93 and Aubrey Hass with an 89.  Top male shooters were Elliot Miles with a 92, Brandt Oldenburg with a 90 and Jeff Paulson with a 89.  Top shooters at state for Aquinas were Lars Gunerson with a 93 and Alexis Stupi with an 89.

Now back to Nationals!  For the first time Cental/Logan had 2 teams competing.  They included Aiden Schulze, Cody Beitlich, Aubrey and Drew Hass, Cowan Reuter, Elliot Geise, Samantha and Brandt Oldenburg, Taylor Turner and Faith Hellerud.  Team competition was held on Friday.  This year there were 230 teams competing from all over the nation with the top 80 teams moving on to the finals on Sunday.  Neither of the teams advanced to the finals, even with scores of 99, 95, 94 and 91’s!  They found out how tough the competition is at nationals.  Plus, Aiden, Cody, Drew, Aubrey and Cowan will tell you that it’s not that easy shooting in torrential rain and wind!  There were honors to be handed out though.  Aubrey Hass earned another 25 straight nationals patch.  Drew Hass and Brandt Oldenburg earned their first 25 straight nationals patch.  Taylor Turner earned her very first 25 straight ever and went on to earn a 50 straight.  A 50 straight was also earned by Aiden Schulze. He almost had a 75 but dropped bird  number 70.  Individual competition was held on Saturday.  All ten Central/Logan athletes competed, as did Alexis Stupi the end of the day on Sunday Alexis ended with a 191 out of 200 which put her in 215th place. And how do you end up being 14th in the nation out of 1,716 shooters?  You go out and shoot a 99 in the finals.  WAY TO GO AIDEN!!!   You know the competition is tough when you miss 3 birds out of 200 and end up 14th.  But with a 99 in team competition, a 98 individual qualifying and a 99 in the finals- not a bad 3 days of high level shooting!

This year between the Central/Logan and Aquinas teams we had over 75 students practicing and competing on Monday or Wednesday nights.  This could not be possible without the many volunteer hours that were put in by a number of members of the Chaseburg Rod and Gun Club.  Thank you to everyone who helped out with coaching, maintenance, food prep and pure positive attitudes for the young athletesfrom Aquinas.  Aiden Schulze shot a 98 and Alexis Stupi a 96 to move on to the finals.  By.  Also, thank you to the families of the athletes for going above and beyond to make this a great season.  The great thing about the trap teams is you don’t need to be 6’ tall and 200 lbs, or run a 9.5 second 100 yard dash.  Every size, shape and gender competes on an even playing field.  Next time you are at the club please check out the banner by the trap range.  This banner lists all the sponsors for the Central/Logan team.  Please support them like they support us.
We couldn't do it without them.  And if you or anyone else would like their name on our banner next year, please let the coaches know.  Cole Woods, John Le Jeune or Randy Hass are the coaches to contact.  There's always room for more sponsors!  Thanks to the rod and gun for also supplying a first class facility for the team!

Planning for the spring 2023 season will begin in January. If you know any 6th-12th grade student in the La Crosse school district or attending Aquinas that would be interested in participating contact Cole Woods, Randy Hass or John Le
Jeune for more info. They can also be contacted if you are interested in becoming a sponsor of the Central/Logan or Aquinas high school teams.
​
by Sue Hass

Chaseburg Rod and Gun Club is home to two high school trap shooting teams, Central-Logan and also Aquinas.  This is the fastest growing high school sport in the Midwest!  The season begins in late March and runs through May.  The Central-Logan co-op team shoots on Mondays starting at 5:00 p.m. and the Aquinas team shoots on Wednesdays at 5:00 p.m.  Any student, including middle school students, who will attend these high schools in the future are allowed to join with parent/guardian approval and a hunter's safety certificate.  Several of our club members donate significant time to this worthwhile endeavor, serving as coaches, helpers and range safety officers (see below).  Many thanks to them, it is much appreciated!  These leagues and the teams themselves would not be possible without the generous support of the individuals and businesses that generously donate money to this league.  A list of last year’s sponsors can be found below and on our website, on the high school trap page under the Trap page.  If you have any questions on the league, please contact Cole Woods (608) 386-6791, John Le Jeune (608) 386-0979 or Randy Hass (608) 792-3008.  More details can also be found on the high school trap page under the Trap page on our website, chaseburgrodandgun.com.  An excellent source of information is the state website, which is wiclaytarget.com, go to the Frequently Asked Questions page.

Update!  This year there are 44 shooters from Central/Logan high school and 52 shooters from Aquinas high school.  Please thank and support our many sponsors listed below, without them these teams would not be possible!